Einstein Got That Right! 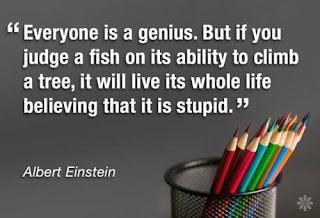 This image showed up in my Facebook news feed yesterday, and I thought it was worth sharing.

Thanks to Howard Gardner and others, we now know that there are multiple intelligences.  Gardner's book, Intelligence Reframed: Multiple Intelligences for the 21st Century, New York:  Basic Books (1999) identified  Spatial, Linguistic, Logical-Mathematical, Bodily-Kinesthetic, Musical, Interpersonal, Intrapersonal and Naturalistic intelligences.  And most of those intelligences are not measured on the standardized tests mandated by No Child Left Behind, or ACT, SAT and GRE exams.

I also believe we each have innate or God-given gifts beyond the realm of intelligences, which might include, but are not limited to St. Paul's lists of spiritual gifts in Romans 12:6-8 and I Corinthians 12:8-28.

One of my greatest challenges as a parent, grandparent, and mentor has been to help children discover and value their unique gifts and to help them explore and develop their talents.    I remember when my son Jeff was very little (probably 3), he would sometimes start talking about things, and I would say, "Jeffrey, how did you know that?"  And he would reply, very matter-of-factly, "I thunk it up in my own brain!"  He's now an economic analyst at the Congressional Budget Office, where his grown up brain gets to do quite a lot of thinking.

Imagine what a wonderful home, workplace, or community we could build if each person was allowed to play to his or her strengths.

Posted by pasqueflower at 11:42 PM