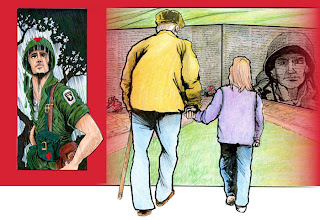 Today is Veteran's Day in the United States, when we pause for a moment to say "Thank You" to all the men and women who have served our country in the Armed Forces.

An old friend from South Dakota, Dave Volk, a decorated Viet Nam veteran, just published his third children's book, My Grandpa's War.  The book is a retrospective on Viet Nam as seen through the eyes of a curious 9-year-old girl who visits with her grandpa, a veteran, as he reminisces about the Viet Nam War.   It's a serious read, but with a positive message.  Jason Folkerts, the illustrator, did an outstanding job.  The cover artwork is shown above.  Read more on Amazon.com: http://www.amazon.com/My-Grandpas-War-David-Volk/dp/1461146240.

My own grandpa's war was World War I.  He always bought me crepe paper poppies on Poppy Day and told me poppies grow in Flanders Field.

My parents' war was World War II.  They didn't want to talk about it.   My high school history teachers didn't want to teach about it.  I am thankful to Tom Brokaw and Ken Burns for helping me understand "The Greatest Generation" and the human side of WWII.

My uncle's war was the Korean conflict.  Most of what I know about that conflict I learned from f watching  the original movie version of M*A*S*H, and years of TV show reruns.

I am a Baby Boomer, and my generation's war was Viet Nam.   Every night on the evening news Walter Cronkite recited the body counts:  Killed, Wounded, and Missing in Action.   When I was a senior in high school, the boys in my class were part of a birth date draft lottery.  We watched protests and race riots on TV news, but they were all far away.   There were no anti-war protests in my little prairie home town, but we did listen to the protest songs of the 60s and early 70s, and wondered if the war would ever end.

My children's generation felt the shock of 9-11.  They all have friends who have served in the wars in Iraq and Afghanistan, many on multiple deployments.

I pray that my grandchildren's generation may be the first in decades not to be directly touched by war.  With that in mind, here is a link to Pete Seeger singing one of my favorite Viet Nam era songs, Where Have All the Flowers Gone?: http://www.youtube.com/watch?v=1y2SIIeqy34.  The chords were simple enough I could play it on my cheap acoustic guitar back in the day.   Caution: The slide show that accompanies the music may bring a tear to my eye.

Posted by pasqueflower at 3:48 AM